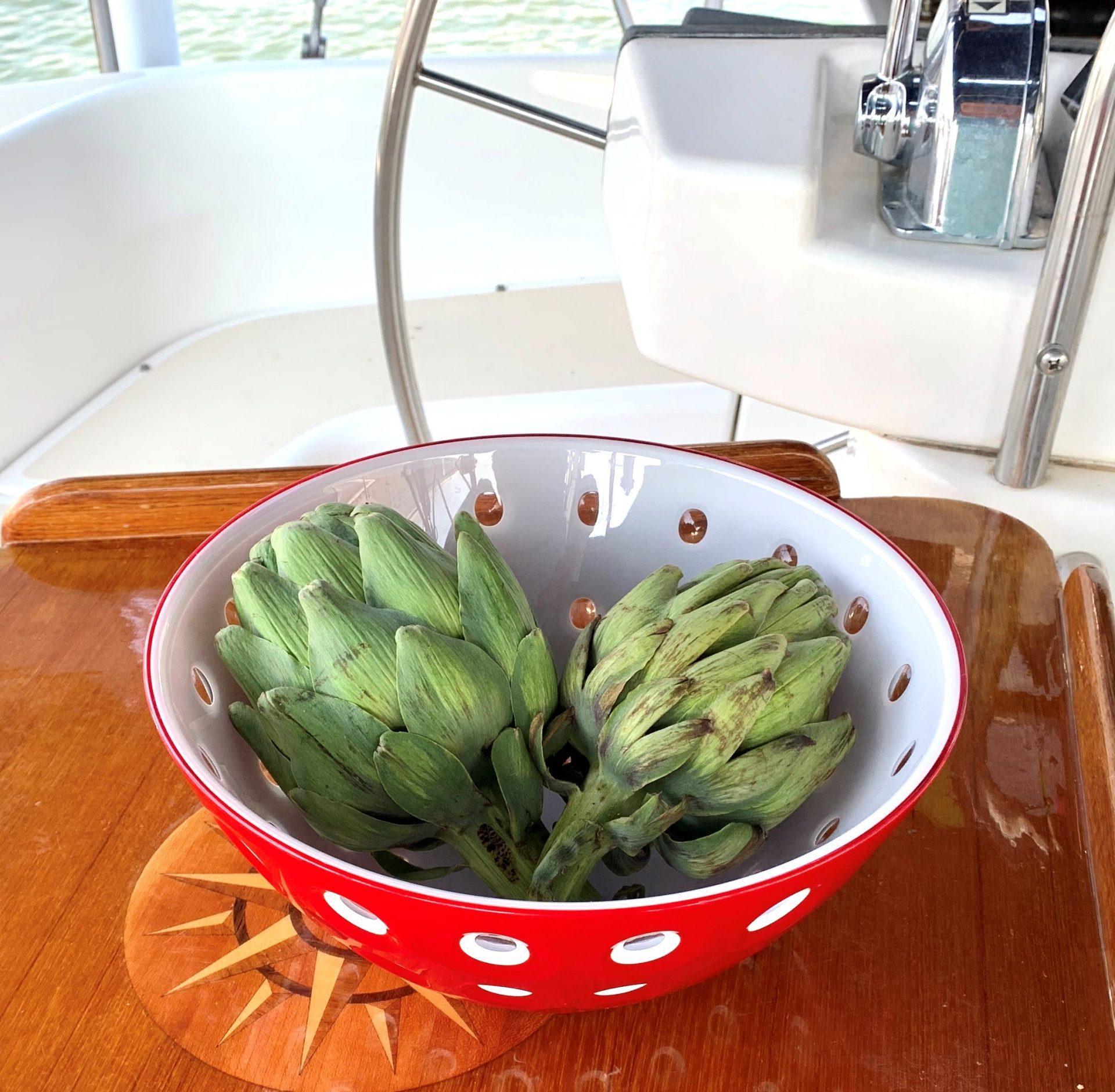 I took this photo in the cockpit of our sailboat recently.  At the time, I was testing in my galley the first new recipe which is Simple Artichoke Dip.  By now, I have made the hot appetizer a half a dozen times as it goes well will grilling in the summer time.  Dave and I also steamed these two artichokes, which was surprisingly easy.  The leaves and hearts were tender and delicious as we dipped them into melted butter.  I didn’t know the health benefits of artichokes until recently.   Artichokes are rich in minerals such as potassium, magnesium and phosphorus.  They are good for enhancing the health of your heart, liver, digestion and cholesterol metabolism.  The fiber in the artichoke is also exceptional for your blood vessels and arteries.  I am sure I have said this before, but it is always fun to find out that something you love to eat is also good for you.

Whenever something unique comes up in life (like a new handy gadget), it is easy to say “It’s the best thing since sliced bread”.  It begs the question, when was sliced bread invented?  After college, Otto Fredrick Rohwedder owned and ran a string of jewelry stores in St. Joseph, Missouri.  He had an idea for an ingenious device.  So in 1912, he sold all of his stores and moved back to his hometown of Davenport, Iowa.  Over the next couple years, he was to create a bread-slicing machine that would automatically cut loaves of bread into slices.  He became known as the “father of sliced bread.”  About that time, the toaster was being invented, so his timing could not have been better.  (As a sidebar, I have included a photo of a modern bread-slicing machine at the end of this newsletter.)

The most famous gourmet grilled cheese is a French Croque-Monsieur (or to crunch-Sir).  It is a hot sandwich made with ham, Swiss cheese and bechamel sauce that is baked in the oven.  As you can see in the photo at the end of this newsletter, it is a rich treat.  The dish originated in a French cafe in 1910 as a quick snack.  I like bechamel sauce so it probably won’t surprise you that in the future, I will need to test this recipe.  But in the meantime, I have added the Classic Grilled Cheese Sandwich because it’s popular and hard for most people to resist.  Also, there are so many other things you can add like avocado slices, bacon, heirloom tomatoes, arugula, grilled red peppers or apple slices, to name a few.

My last recipe for this month is Sue’s Peach Bisque, which is delicious and refreshing.  You can eat it warm or chilled and add a splash of sherry, if that appeals.  So where did sherry originate?  Sherry is a fortified wine made from white grapes grown near the city of Jerez de la Frontera in Andalusia, Spain.  This is the southwest corner of Spain on the Mediterranean Sea and not far from the Algarve in Portugal.  Sherry goes well in cream-based soups like this peach bisque.  But it also tastes nice in dishes like sautéed mushrooms, gravy, slow-cooked pork and roasted chicken.  In addition, if you like a fortified white wine, this is fantastic to sip on as well.  Salud! 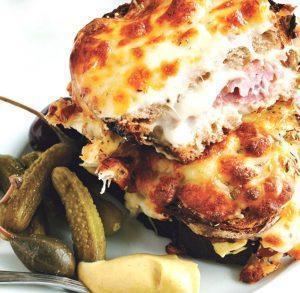 Open Faced Pizza and the Mystery of the Sweet Cobbler!